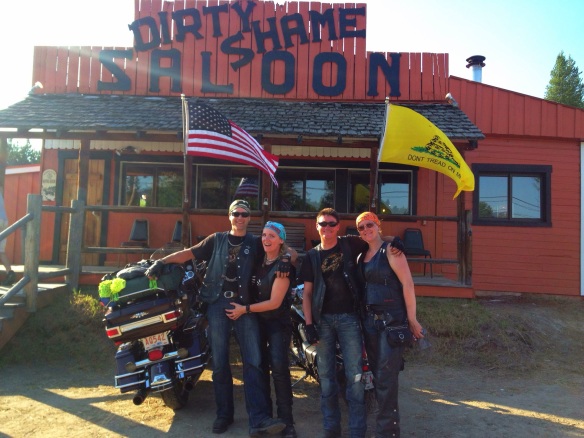 In three prior posts on Thebeerchaser, I have written about the World Famous Dirty Shame Saloon in Yaak, Montana – its fabled history, the Shame’s character, the staff,  the regulars, the events that capture the imagination of the community and its erstwhile owner, John Runkle – the most recent recipient of the Beerchaser-of-the-Quarter “honor.” (Click on the links to see these posts.)

Since I stated in a previous narrative that it is the most interesting of the 350 establishments I’ve visited and reviewed in the eight years of Thebeerchaser’s Tour of Bars, Taverns and Breweries, the Dirty Shame and John Runkle collectively deserve one final narrative.

Now many bars can be defined as “a place where lonely desperate people go to get hammered enough to find other lonely, desperate people suddenly irresistible.” *1 The Dirty Shame Saloon is the antithesis of this description.

The book is by James Napoli and a brilliant tome you should definitely read – one rivaling in wit and intellect, the legendary On Bullshit by Princeton Professor Emeritus, Harry Frankfurt – another Beerchaser-of-the-Quarter. (January 2012)

The Shame is a community treasure and one which Yaak residents regard with affection.  I previously tried to convey the stories which John related to me ranging from the AR-15 incident last summer as well as the  the “crack pillow.”

And don’t forget the double shots of whiskey downed in a quick and unfriendly visit to the bar by a now convicted murderess and her boyfriend after they dispatched her husband at Milepost 48 on the Yaak River Road – the Shame is at Milepost 29.

There’s also the tale about the kidnapping of the life-size Trump poster, the young women who “bartered” for their fare to Portland, Oregon, the Missing Person chronicle or the personable and courteous nature of the direct relatives of the leader of the Kehoe Gang related in the second post:  https://thebeerchaser.com/2019/09/11/the-dirty-shame-saloon-in-yaak-part-ii/ 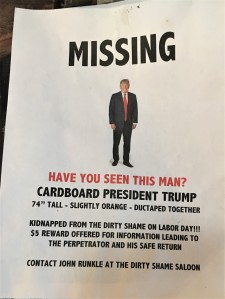 You will find out if you stay tuned to this blog for rundowns of the other 48 bars and breweries on our June road trip through Idaho, Montana, the Dakotas and Wyoming, that there are many other historic dive bars and excellent breweries in nearby Kalispell and surrounding Montana villages not far from the Dirty Shame. You can then hit these on your road trip as listed in an earlier blog post on Beerchasing in Big Sky Country.

Thus, it is my strong recommendation that you add a visit to the Dirty Shame Saloon and raising a mug with John Runkle to your bucket list.   As such, you will need lodging, so l want to provide a little more info on the Yaak River Lodge – about 1.5 miles down the road from the Saloon – also owned by John since 2004. 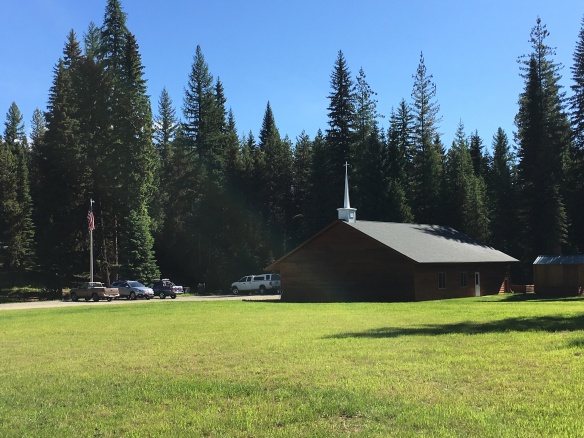 Drop in on Sunday to hear Pastor Clayton..

The Lodge sits on a beautiful 7.5 acre site on the Yaak River and across from the wonderful Yaak Community Church.  I attended their Sunday service on my last morning in Yaak and Pastor Clayton gave an inspiring sermon.   I also sat next to a memorable career Naval officer who retired in Yaak.

The church was built in the tradition of community barn-raising by members of the congregation and with no debt incurred.  You should view this impressive YouTube video to visually comprehend

At  the Lodge, you will see llamas and a horse grazing in the pasture in back. 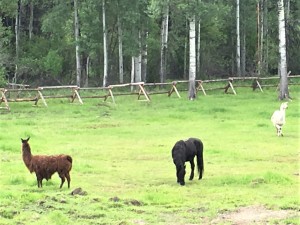 There are no locks on the doors to the Lodge or its rooms, but whether you stay in the Moose Room or the Wolf Room, you will be secure.   In the event of inclement weather, just read a book in the living room by the roaring fire. 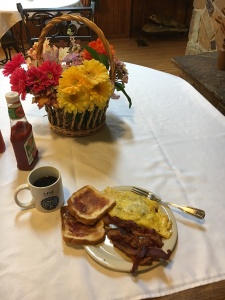 Folgers, cheese omelet and bacon….It doesn’t get any better.

And the $115 nightly charge (that’s during the busy season) also includes breakfast – one morning it was memorable blueberry pancakes cooked by John and the second it was an outstanding omelet cooked by Darilyn, who is also the lead bartender at the Shame.  There was plenty of bacon with it……

Or you can sit in the back and tell stories with friends…… as you can see by the photo, this fire pit is a great place to have a nightcap.

During the summer months the average high temperature is in the 70’s to low 80’s lowering to the low 40’s at night.   September is also usually pretty moderate.

Or take a walk down to the beautiful Yaak River flowing through the property….

The Yaak River at the back of the Lodge.

The coffee was also notable – not Starbucks but Mountain-grown Folgers which lent credence to their slogan, “The best part of wakin’ up is Folgers in your cup.”  (I might add that Folgers (black) goes extremely well with either the blueberry pancakes or cheese omelets.) 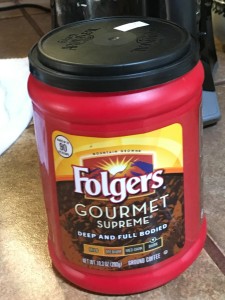 Although there are a number of gun stories related to the Dirty Shame, John told me he did not hunt so I asked him why he had a package of shot gun shells on the kitchen counter. “Oh those. My mom who lives near by has a recurring bear problem at her house which is nearby……”

As I mentioned previously, John is an Orange County, California native, served as a paratrooper and instructor in the Army and returned to earn his degree at Cal State Fullerton.

Starting in 1988, he then built a successful real estate company.  In the twenty years he managed it, he successfully expanded the business to seven states with 300 realtors.

Runkle realized one day after being inundated with business calls while vacationing in Glacier National Park that his ambition was nature’s way of preparing him for heart medication. (* 1 Page 22)   So he threw his cell phone out the window and ended up buying first the Lodge in 2004 and then the Saloon in 2013. He and his wife, Dallas, welcomed their second daughter in August.

In the entry way to the Lodge was a framed advertisement for the Lodge and the Saloon.  I asked him (with some element of concern) about this.

That said, I certainly hope to visit Yaak again in ten years and see John still at the helm of these two great businesses in NW Montana.

John told me, “At 57, I’m no spring chicken and I don’t have much of a bucket list left. I’m usually at the bar until 2:30 AM on Friday nights and then Saturday morning, I’m up cooking breakfast at 5:30. On Monday morning, it’s tough to get going.”

And he realizes that each Monday is one of 52 opportunities we are given each year to question what the hell we are doing with the rest of our lives……That said, the following Facebook post also demonstrates why John continues his legacy as a leader, a hard worker at whatever he does and why those who work with him admire his character.

“As another summer approaches, I think of how much whining I do as it become overwhelming busy at the Dirty Shame.  I have to continuously remind myself that I own a hunting lodge and a wild west bar.  Life just doesn’t get any better – truthfully.”

John, helping to unload food for the Crawfish Festival

I think John would be the guy who in an office setting, would fix the copy machine after a paper jam.  You know the situation – the copier sits there non-functional for several hours with everyone just ignoring it.   After he fixed it, he would then photocopy his rear end and leave it for the next user as the Runkle “signature”…….

Unjamming and leaving a signature….

So I was not surprised to see another recent Facebook post by John asking for feedback on whether Yaak – with the Dirty Shame as the focal point – should become the new site of the legendary Testicle Festival.

The Testy Festy was an annual event held for years in Clinton, Montana although discontinued in 2018. It attracted people from all over the West for a chance to sample the culinary delicacy Rocky Mountain Oysters.

“Testicle Festival Canceled Following Deaths – Attendance Decline:  After 35 years of drinking, nudity, debauchery and tens of thousands of Rocky Mountain oysters, the Testicle Festival is over…….”  (The Missoulian  4/23/2018)

Considered a delicacy by some……

Whether Yaak has the infrastructure to support the resurrection of this “carnival” remains to be seen, but it shows that John is still ready to promote and his entrepreneurial spirit still courses through his bloodstream.

And if you don’t know what Rocky Mountain Oysters are, you should look it up.  You might be surprised…..  (The Beerchaser’s personal recommendation is to keep the current Yaak celebrations and not try to resurrect this jubilee, ball or whatever you want to call it.)

Because with the Adult Easter Egg Hunt, the Sasquatch Festival, the Crawfish Festival and spontaneous celebrations, John and his crew keep the residents of Yaak entertained and offer the chance to celebrate their community.

Some regulars told me that John should use his real estate skill and negotiate either the purchase or merger with the Yaak River Tavern (a nice bar with a personality that could use some spark) across the road – possibly even construct Yaak’s first skybridge between them…….

That way Geoff, the amiable, slightly inebriated singer I met at the Tavern, could entertain at either location.  Those at the Tavern that night got to hear Geoff’s original creation celebrating the joys of beer, bananas and Montana beaches…!

Don’t wait too long to plan your visit.   Now if you are looking for the Dirty Shame on the internet, don’t get confused with the Dirty Shame Saloon in Garden Valley, Idaho.

Besides a probable violation of John Runkle’s federal trademark on his bar (he is not interested in a lawsuit – “The lawyers would get all the money…” ) it is a poor and unsatisfactory imitation of the “World Famous Dirty Shame Saloon” as evidenced, in part, by the fact that the Idaho establishment on Yelp gets 2.5 stars (out of 5) while the Yaak authentic garners a rating of 4.5.

And if you want to talk to John and find out more about the Lodge i.e. seasonal rates and availability, give him a call at (406) 295-5463.  You will enjoy the conversation and tell him that Thebeerchaser suggested it.