Beerchaser regular, Jim Westwood, at the entrance to Mad Hanna

While one can cruise the infamous Barmuda Triangle (also known as “The Stumble Zone”) in SE Portland and find numerous dive bars, unearthing these hidden treasures in other quarters of the Rose City, has become more challenging – particularly with the closure of some historic dives.

In the eight years of Thebeerchaser blog, I’ve reviewed quite a number of memorable dive bars.  I attempted to memorialize (if you will) the Portland all-stars in this category in a February post:  https://thebeerchaser.com/2019/02/09/thebeerchasers-best-portland-dive-bars/ .  It captures the essence of my four personal favorites.

Now my second visit to Mad Hanna was after publishing the aforementioned post or it would have been an addition to the four favorites.   And it is in NE Portland, which does not reflect the wealth of dives in the southeast quadrant.

Mad Hanna (hereafter “MH”), while clearly exhibiting the notable characteristics of a dive, borders on the temperament and character of a neighborhood watering hole.  As evidence of this slightly schizoid ambiance, see  both the martini glass and the Pabst sign which decorate the front of the establishment which is otherwise dumpy and rundown – not that there’s anything wrong with that. 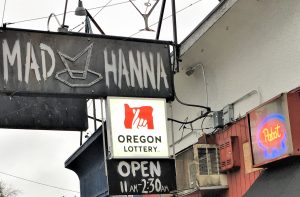 Notice the martini – gin with an olive – in the upper right part of the sign….

We have to be careful here because one description in a link to the MH website describes it as a “casual, playful tavern.”  (No dive bar should have the adjective “playful” characterizing it, so we will scratch that phrase as misguided…..), but it does have positive mood or presence similar to another one of the NE dives – The Standard. And it self describes in the caption to it’s own website:  “The Best Dive Bar in Portland.”

While I spend a considerable amount of time researching the establishments I visit, I had never heard of MH until reconnecting with a friend, Hillary Barbour.  She lives in the general area and said that it was a bar that deserved recognition by Thebeerchaser, so my first visit was with Hillary.

I first met her in 1994, when she was a research assistant for the Portland City Club and I was on the Research Board of this civic organization.   She was a recent graduate of Reed College and earned the endearing moniker, “Barbour the Magnificent,” by some of us on the Board because of her superior performance and enthusiastic work ethic.

After a few jobs trying to discover what she wanted to do with her life, she worked as a key staffer for Congressman Earl Blumenauer for almost fifteen years and became the Director of Strategic Initiatives for Burgerville in 2016. 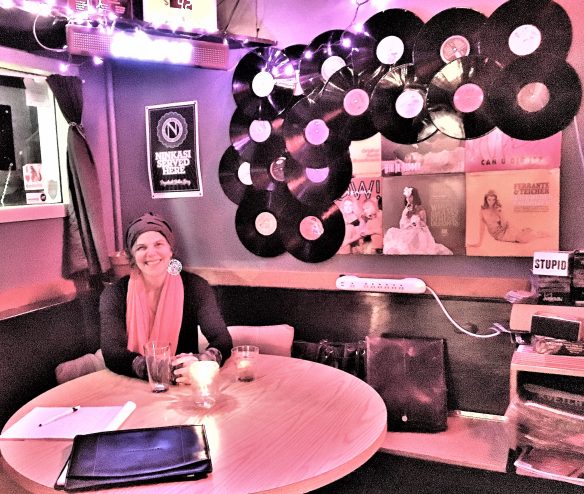 Barbour the Magnificent on her throne at Mad Hanna

As a recent Reed graduate, Hillary spent a lot of time at the City Club trying to  convince us that she was really politically moderate, had worn dresses to most of her liberal arts classes and that most of the students at Reed were just like those at Oregon State University except that they major in Nuclear Physics, Bio-chemistry or Chinese Literature rather than Forestry or Animal Husbandry. 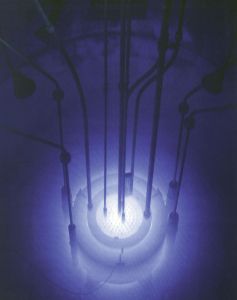 Note:  Some Portlanders may not know that Reed is also the only undergraduate educational institution in the world to operate a research nuclear reactor.    Those who live near campus might consider acquiring a Geiger counter to supplement their portable generators if they view this excerpt from the Reed website: “We are dependent on incoming freshmen who want to run the reactor…..”

Hillary asserted that Reed’s intercollegiate sports program including rugby, ultimate frisbee and soccer, was less expensive and more inclusive that those of the PAC-12 – maybe it was the PAC-10 in 1994….

Ultimate Frisbee in between time at Reeds’ nuclear reactor…

And finally, she tried to explain the Reed’s Student Ethics Code to members of the Research Board  – it differs from most (maybe all) universities in that it is:

“….a guide for ethical standards themselves and not just their enforcement. Under the Honor Principle, there are no codified rules governing behavior. Rather, the onus is on students individually and as a community to define which behaviors are acceptable and which are not.”

Jim Westwood, a hard-core Beerchaser regular, who is also a former Beerchaser-of-the-Quarter and one of the most skilled appellate lawyers and intelligent people I know, was also a City Club leader at that time.   He accompanied me on my second visit to MH.

So as we were drinking a PBR, as a conversation piece, I asked him for his interpretation of this somewhat abstract university credo.  He mumbled something about the substance of jelly-fish and then referenced protoplasm and amoebae…

But we digress….. Back to Mad Hanna……Why wouldn’t you like this bar?   While the outside might be somewhat off-putting, the inside has everything one could ask for in what is colloquially labeled “a watering hole.”

It has great old beer signs – such as Pabst, Oly and Rolling Rock and a good, although not excessive, selection of brews ranging from the standards to a few micro-brews  (Happy Hour = $4 micro – $2.50 standards and PBRs’ are $2) all of which are listed on a blackboard rather than an electronic display.  I was impressed with their line-up of ten cocktails – see below – which get good reviews.

There’s also an impressive pool table, a poster of Wonder Woman and a few, but not too many video poker machines in addition to arcade (video) games.

Adds to the ambiance…. 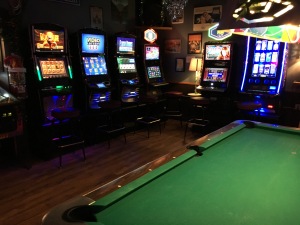 There were a couple of TVs but ones which are of moderate size and for which the glare doesn’t disturb the somewhat dingy but very comfortable ambience.  And instead of low-scoring soccer games or Sports Center blaring on the main screen, there was a muted Charlie Brown animation film captivating the audience. 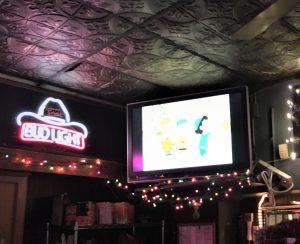 Dive bars are often characterized by hard-core regulars who react with mild to more aggressive hostility to newcomers, but on both of my visits, you are unnoticed when you walk in and stake out a location and head to the bar to order.  That’s because scattered groups of regulars are engaged in active discussions or in friendly interactions with the amiable and helpful bartenders.

People, whether on the excellent patio in the back (see below), gathered around the bar or sitting at tables in small groups, were having a good time. 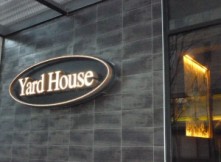 Sterile environment – operated by the same corporation that runs the Olive Garden.

Now there are a few of the bars or breweries visited on Thebeerchaser’s multi-year tour which either reflect sterile, corporate-type settings or environments or worse, a benign neglect or seeming apathy of the owners.  A less genteel way to convey this is that the character of the bar “sucks!”

The only two Portland examples I can cite are The Yardhouse in downtown Portland and Bar 33-Brooklyn just north of Sellwood.

A lot of potential, but apathy greets you at the entrance

(If you want to learn the rationale for my conclusions, click on the links above, but suffice to say that if you really are thirsty for a beer, have at it.  But if you want a “bar experience,” don’t waste your time.)

Mad Hanna is the antithesis of these bars and I would suggest that it’s because of the attitude of the co-owners —Crystall Maddox and Liz Hanna, who not only came up with the good name, but also make efforts to instill community and the spirit that seems to radiate within the walls.

For example, their Facebook page is informative and filled with information and they also have a nice, but not overly sophisticated website with scores of pictures of people having fun and the inviting description below:

“Mad Hanna, your neighborhood living room, drinks are cold and the welcome is warm.  Need a laugh or ear to bend, swing on by and you’ll find it.  Fresh squeezed juice and house-infused liquors mean delicious hand-made cocktails.

Enjoy ping pong, horseshoes and conversation in the sunny backyard or stay inside for pool, jukebox and sass from the best bartenders in town.  When you’re here your part of the family – we got your back!” 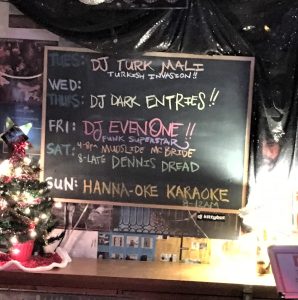 Let’s look at the evening activities:  Tuesday and Thursday they have DJ NIghts from 8:00 to midnight and on Saturday from 4:00 to midnight. On Wednesday, it’s Open Mic Night from 6:00 to 110:00 PM.  Don’t forget Karoke on Sunday……and periodic movie nights. 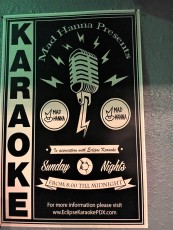 And their DJ booth is unique – also a great place to sit when they are not spinning discs.

As a side note, the Rovon Inn used to be the name of the bar prior to the change in ownership in 2012 that brought us Mad Hanna.   It was involved in a dram-shop lawsuit back in 2011 involving a drunken driver who allegedly drank there and at another establishment before being involved in a car wreck that killed a woman in another vehicle.)

While both times I was there, it was a typical Oregon winter day – cold and drizzly, but even so, there were people bundled up on the back patio and I can just visualize the activity during good weather – although as the sign indicates, under control…….! 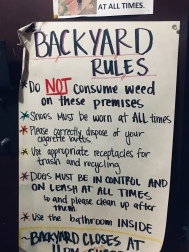 Earlier I mentioned the tap list, but MH is also known for it house-infused cocktails and jello-shots they have a good collection and get excellent reviews in print and social media:

“……a chalkboard cocktail menu juggling the sublime (“$6.25 Ginger Whiskey Sour”) and ridiculous (“$9 CBD Margarita”).  While most regulars enjoy the well-curated array of mostly local brews, make sure to plunk down $1.50 for a pudding shot—an addictive dollop of soft-serve indulgence that’s become Mad Hanna’s signature libation. As an ideal blend of the playful and potent, the 80 proof is in the pudding.”  Willamette Week June 9, 2018

Now you won’t find an expansive menu here, but they do have some munchies from nachos to hummus and the grilled-cheese sandwich options gets good comments.  And my friend, Jim, paused in our conversation while chowing down on his $4.50 (Happy Hour) peanut butter and jelly sandwich.

This post is already too long, but there’s still a bit more to the story.  One factor that can add to or detract from a bar is the “juke box.”  MH’s garners great reviews not only for the music, but the bar’s approach is consistent with the tone set forth above:

“……a special note – check out the jukebox here – it has such a great mix, everything from punk to classic country to ROBYN! don’t be afraid to throw in a few quarters and dance, also don’t be shocked if strangers join in too! its a real friendly place 🙂” Yelp 7/8/14  (For those out of the cultural mainstream, ROBYN is a Swedish singer and songwriter…..)

Fantastic juke box, but who the heck is ROBYN??

Regardless of whether one considers Mad Hanna a dive or a neighborhood bar, it warrants a visit.

You will see evidence of the comfortable vibe mentioned in this post whether it is seeing a poster about a benefit to help an ailing bartender or resident of the neighborhood,  having a chat with one of the amiable bartenders or even hitting the bathroom – it also has character!

You should take the advice of this 6/9/18 Yelp reviewer who stated:

“Probably the coolest place I’ve been to in a long time. I will be going back to this place whenever I’m in town!”  6/9/18

And if you run out of conversation topics, you might want to revisit the interpretation of the Reed Ethics Code.  Alternatively, you could discuss the recent article, “What is a Reedie Anyway?”