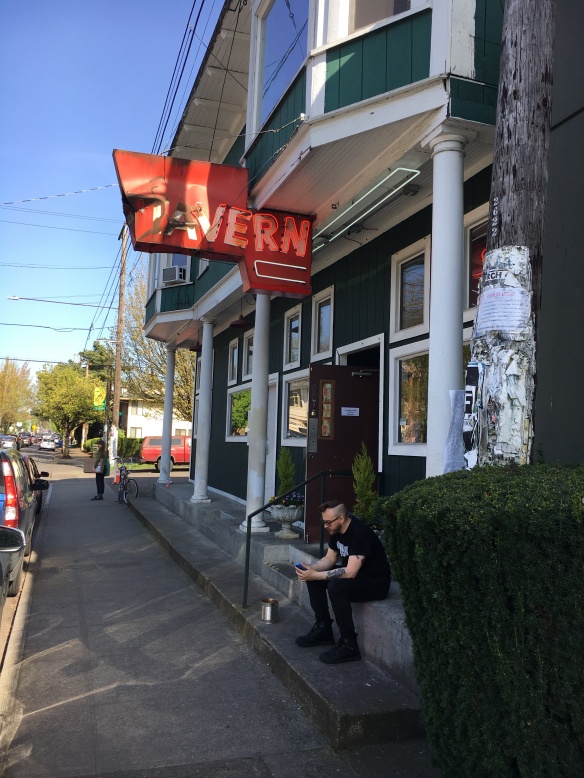 The Vern in Southeast Portland (in the area sometimes referred to as ‘The Barmuda Triangle” because of the prevalence of bars and taverns in the area) epitomizes the debate Willamette Week aptly labeled, “(Portland’s) endless war between condos and character.”

You will see below that while a number of people in their social media reviews bemoan the fact that their beloved Hannigan’s Bar – the Vern’s predecessor which opened in 1986 – and the old Vern are now history – the bar was remodeled, the interior refurbished and the menu revamped, into what is now a cozy neighborhood watering hole that still has many aspects of dive bar ambiance. 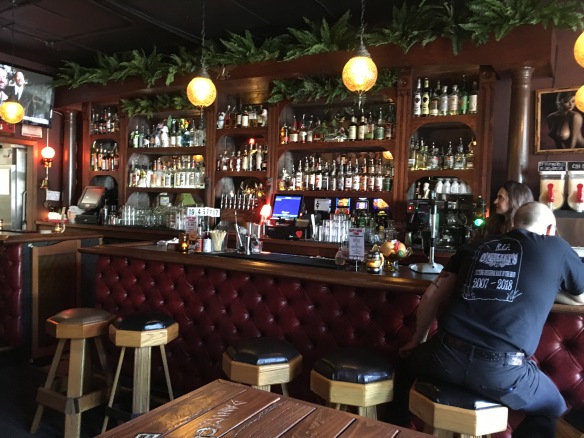 Now some take issue with what WW calls the transition from “haute-scumbag chic to fresh new spaces” of the rebooted Vern. I would suggest, however, that Portland is fortunate to have entrepreneurs, Warren Boothby and Marcus Archambeault to save these establishments from development into structures such as urban storage units or commercial office space.

Alternatively, some old bars with great character have permanently disappeared and supposedly suave cocktail and beer bars – many in strip malls – have sprung up.

The Club 21 was one owned by this duo which didn’t survive and what was a wonderful bar in an iconic building that at one time served as a Greek Orthodox Church is now gone.  Fortunately, as you will see below, some of the old signs and memorabilia from the Club 21 have a new home in The Vern.

What happens when a fine establishment like the Club 21 closes…..

An example of the urbane-type establishment  is the Yard House in downtown Portland – a bar although boasting “the world’s largest selection of draft beers featuring over 100 imported and local beers bars on tap,” has all the ambiance of an Olive Garden.

That’s quite possibly because the chain of Yard House bars across the US is owned by the same corporation as the above-mentioned pseudo Italian eatery which those who love boffo buffet flock to for “Never Ending Stuffed Pastas – Pick your pasta sauce and topping plus all the soup or salad and breadsticks you want – over and over….” 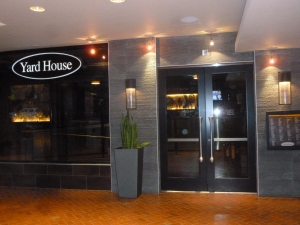 Indeed, we can thank this duo for their commitment to save and invest in such great bars as the Sandy Hut, the Double Barrel, Gold Dust Meridian and the Elvis Room, which are still thriving.

(To see Thebeerchaser’s reviews, click on the links above.)

To further the case on why The Vern’s transition in late 2018, potentially saved it, take this excerpt from WW’s 4/9/19 review after it reopened, “(The Vern) weathered multiple waves of change with one foot planted firmly in the grave. It’s teetered on the precipice of extinction for decades.”

The Vern garnered its moniker purportedly by what the Portland Mercury described in its 12/19/18 review as “a long-neglected neon sign that once flashed ‘Vern’ after a decades-old auto accident 86’d the ‘TA’ in ‘TAVERN.’” 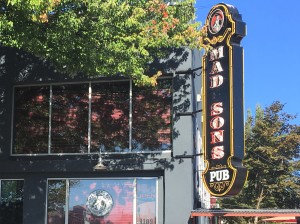 In fact, the story reminded me of another great east-side bar that had a similar signage story – Mad Son’s Pub – which changed its name from “Madison’s” after the “i” in the neon sign burned out.   To further my assertion regarding the precarious nature of old bars, Mad Son’s, which I reviewed in 2016 and had great ambiance, permanently closed in 2017.

The Vern was suggested by my friend, Hillary Barbour, who hit a home run when she previously recommended Mad Hanna’s as a dive bar that should be visited by Thebeerchaser. (Click on the link to see the review). 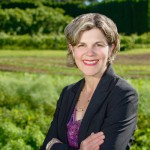 Hillary, a Reed College grad, is now the Director of Strategic Initiatives at Burgerville and was recently honored by The Nation’s Restaurant News on their 2020 Power List in an article captioned Burgerville’s Hillary Barbour Develops a Burger that is Better for the Planet.”

It should be noted that inclusion on any kind of establishment Power List may be viewed with reproach by her fellow Reed alums. 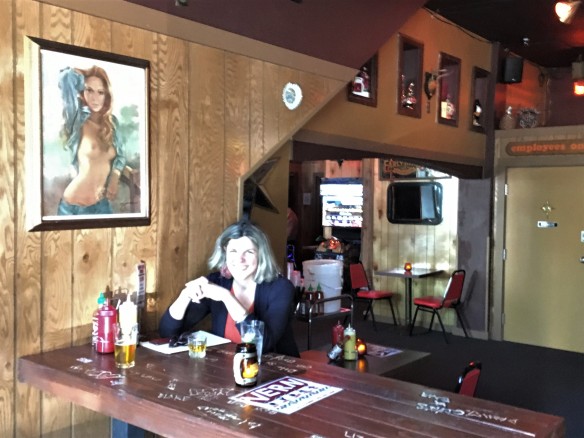 Hillary Barbour at The Vern

The space is expansive with two large rooms and features which make The Vern a good place to raise a mug or just hang out.  These include a great backbar with cool barstools, large booths with red felt cushions, several old-fashioned pinball machines as well as Big Buck Hunter (and a big buck head taxidermy mounted on the wall), a great fire-pit and a number of typical dive bar signs – many from the Club 21 – including my favorite Schlitz globe. 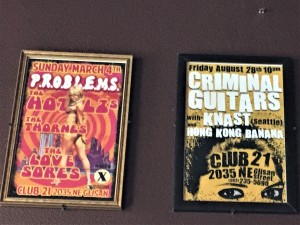 Don’t forget the iconic “STEAKS” sign from the aforementioned Club 21 as well as some posters from live music events at the former bar. 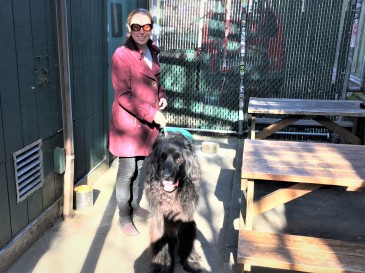 There is also a great patio where we had a nice chat with Maureen, a Vern regular who lives nearby and was out on the patio with her friendly Newfoundland breed dog, “Jelly Bean.”

The Vern could improve a few minor things such as creating a website and improving its Facebook page which leaves a lot to be desired.  However, the history of the “institution” and the stories, which go back over thirty years, remain intact notwithstanding the spruced up interior fixings.

For example, many Portlanders will remember an August 2019 Oregonian story entitled “Man in MAGA hat clashed with crowd before his alleged assault at different bar, witnesses say.”

The Vern was where this saga began when at about 10:30 on a Saturday night, a guy and his wife, who told police that she “….wanted to see how people would treat her husband if he wore a Make America Great Again hat into some bars.”

(Not related to the Oregon Live story)

The female bartender at the Vern – she asked the man to leave – not because of his headgear, but based on his demeanor and actions.

And patrons said he began “Scanning the room and staring down anyone who would happen to look at him…..(and) began to accuse people inside the bar as being cowards and draft dodgers.” This in spite of the fact that he had no military service and the US discontinued the draft in 1973. 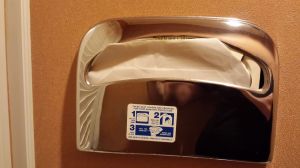 Really??  Only one head where these belong!

Now the hat guy, who was subsequently assaulted by another woman and man outside the Growler Taproom – about ten blocks down Belmont Street -alleged that somebody at the Vern “placed a toilet seat cover on his head and that another patron threw something at him.”  That claim was questionable, but the two were later arrested by Portland Police for third degree assault.

The entire incident is somewhat humorous since nobody was seriously hurt, but the statement of a guy who filmed the debacle at The Vern before the couple left has to be one of the most misguided and ridiculous statements I’ve seen since starting this blog:

“I would equate wearing a MAGA hat while in hyper-liberal Portland to wearing Klan robes in a black community.”

Now while I may personally question the hat person’s  policy leanings, God help us when the expression of political preference – be it in speech or on apparel – is perceived in accordance with this intellectually challenged observer’s judgement.

How about pinball rather than politics……!

So what about the beer and the food at the Vern.   They have Rainier and two ciders on tap in addition to four micro-brews for which pints are a reasonable $6.

The food offerings are pretty typical of the other establishments of these two bar owners and the menu has a lot of options.  Take this WW review:

While Hillary and I did not eat at The Vern, I had the above referenced golden nuggets when I visited the Double Barrel a few years ago and they were scrumptious.   (Given that Hillary is responsible for Burgerville’s locally-sourced and organic menu featuring regenerative agriculture, I wisely decided not to suggest anything on the Vern menu as she would have gotten up and left…..)

That said, the weekend brunch is one that might well motivate me to return even if it required a trip in from the burbs. 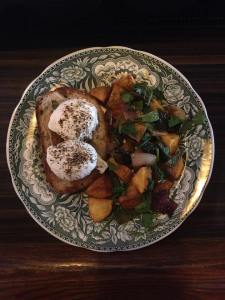 “Everything about the burger was awesome, from the bun to the patty to the ingredients. However, my favorite topping was the crispy onion- it really pushed it up to the ‘wow- I love it, delicious’ burger list.”

Side Note – Different Bar(s) at Another Portland Vern(e)

I often convey related stories when writing this blog.   The latest occurred when I tried to call to check on the number of beers on tap.  I googled “The Vern” and hit the “Call” button on my i-Phone whereupon a very formal male voice answered “Control Room.”

Realizing no bar that I’ve ever been to had a control room, I quickly hung up and rechecked the link and the phone number and then realized that I had called The Vern(e) – but this one was a male prison in England. “The Verne is a men’s prison, located within the historic Verne Citadel on the Isle of Portland in Dorset, England….operated by Her Majesty’s Prison Service.”  (Well at least it was in Portland……)

And to end this review by again pointing out the dichotomy in views on bars that receive the Boothby/Archambeault treatment, I present a quote from Warren Boothby on their intent in their resurrection of the Vern:

“We used to hang out there a lot 20 years ago, and we want it to feel like home again for those who remember it as a place where you could be super comfortable and that wasn’t pretentious.” (Portland Mercury 12/19/18)

Reinforcing this sentiment is the realistic statement of this August 2019 Yelp reviewer who stated:

Granted I never went to the old Vern, but from the sound of it, not many other people went there, either. Checking out the remodel, I’m happy that somebody stepped in and saved this space, even if it’s not really what it used to be.

Again as a reminder, what it used to be was a bar that was going to close. At least this place was taken over by people who have genuine care for the space and the history and for operating great spaces. I’ll be back, and I’ll bring my crew in tow.” 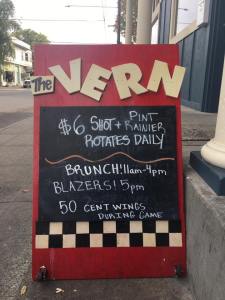 They are also trying to create a community at The Vern with 50-cent wings during Blazer games, an interesting “daily six-shooter” featuring a shot of whiskey and a pint of Rainier  for $6, trivia nights, occasional DJ’s and their excellent brunches to encourage neighbors and groups to patronize.

Thebeerchaser will definitely return to The Vern.

And a tip of the hat (with no logo or slogan) to Warren Boothby and Marcus Achambeault for their continuing stewardship in preserving Portland’s watering hole tradition, notwithstanding a contrary view.

I regard the guy below as one who perhaps should make an effort to allow pragmatism to transcend his naive nostalgia when he wrote on Yelp on 4/23/19:

“Not a dive bar anymore. Sadly the Vern lost its charm in the remodel and we are left with yet another basic-yuppie bar. Well drinks went for $3.75 and now it’s $6. No more pool tables, no more bathtub in the smoking area, and ultimately no more personality.

This place that once felt like a quirky safe space feels awkward and uncomfortable. Trying way too hard to be something else, and it’ll never be the same.  I’m going to be switching my favorite dive bar to Bare Bones just up the street.” 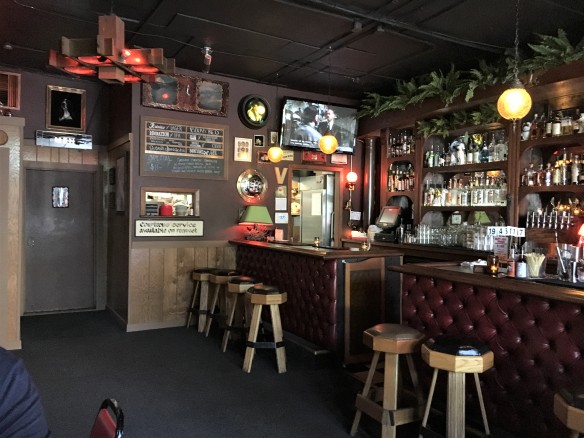 I guess I’ll have to visit and review the Bare Bones Cafe and Bar, but it appears to me to be more of a café than a bar. The Vern will continue the tradition of its predecessors. Go there and don’t be reluctant to wear your t-shirts or hats with slogans regardless of whether they are political or show a college sports theme such as “Go Beavs!!”