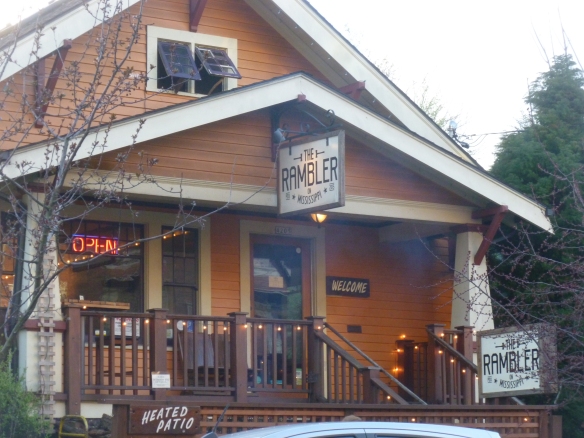 Historic North Mississippi Avenue, while it does not have the overall quantity of watering holes as the fabled Barmuda Triangle in Southeast Portland, has become a gold mine for good bars.

Past visits to establishments such as Prost, Interurban and Sidecar 11 (see  posts dated 11/24/12 – 5/13/12 and 6/6/13) were notable and there are additional venues beckoning such as Bar Bar, Crow Bar and the Liberty Bar and Grill.

My three visits to The Rambler, however, were a pleasure – a quaint and classy neighborhood bar now owned by an entrepreneur who deserves to see his efforts come to full fruition after opening only about ten months ago.

Christian – an entrepreneur with class and vision

The ambiance and friendly environment of the Rambler – in a spacious old house was especially appreciated after the sterile, corporate hew permeating the last bar reviewed – The Yard House in Pioneer Place.  The 100+ beers on tap could not compensate for what it totally lacked in ambiance.

I visited the Rambler with my friend and fellow Portland State MPA graduate, Greg Wallinger, who until very recently, was the heart of the City Club of Portland’s respected research program, having served as Research and Policy Director from 2012 to 2016. 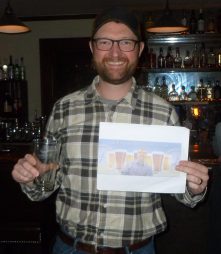 Wallenger with the traditional Beerchaser logo

The Rambler replaces two prior establishments, Casa Naranja and then the Bungalo Bar, which was described by a neighbor in a 2015 Willamette Week article as “a magnet for dirtbags……evidenced by OLCC violations, noise complaints and license suspensions.”

After some lengthy and heated negotiations for the building, there was extensive remodeling to rebuild the bar, salvage the flooring and redo the front of the historic 1920’s bungalow while adding two patios and other features.

Outside by the bocce pit.

Christian Lee, the owner, who relocated to Portland from San Francisco, has established a neighborhood venue which draws rave reviews for the changes including adjectives describing the interior and exterior as, “stupendous, admirable, comfortable and awesome.”

“Here the fire pit(s) and tasteful stained-wood picnic tables are joined by – wonder of wonders – an outdoor flatscreen.  There’s another patio in the front, and in the sideyard, there’s a bocce pit.  You might as well be at the beach.” (2016 Willamette Week Bar Guide) 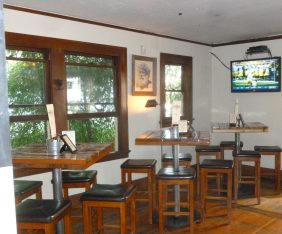 Christian is described as “career bartender” and knows his craft well.  The Rambler has eight beers and five wines on tap – limited but adequate including one very interesting brew  premiered from Portland’s Grateful Deaf Brewery.

And $1 off during Happy Hour

But it is the craft cocktails that garner the praise and descriptions such as “expertly-crafted and inventive.”

“……a kegged cocktail named for Doc Brown, plus a host of $8 to $10 variations on the Manhattan, Old Fashioned and vodka fruit punch.”

There are eighteen menu items – no heavy entrees’ but interesting sandwiches and appetizers. Christian stated that they have good dinner crowds.

Almost all of the reviews and comments on the food are favorable with emphasis on the Frito Pie, fried Brussels sprouts with charred onion, fish tacos, smoked brisket chili and a “$13 burger stuffed with more proteins than a vegan bodybuilder’s medicine cabinet.” Willamette Week 2015 Bar Guide. 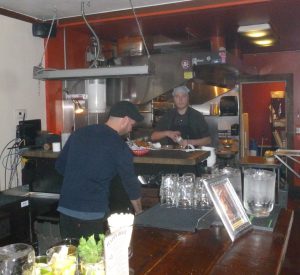 Good results from the kitchen

“The bartenders were fantastic, the fish tacos were delicious, and the overall atmosphere of the bar was just awesome.”  From two San Francisco visitors in a 9/15/15 Yelp review. 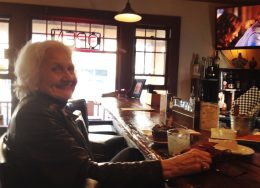 Lee at work on the brussel sprouts while downing a Portland Skies…..

I did not eat on any of my three visits to The Rambler, but having a great chat with amiable neighborhood regular, Lee, who was eating the Brussels sprouts while consuming the special cocktail of the day as shown in the picture, tempted me to grab a fork and sneak several bites.

Of course, the quaint atmosphere of the bar fit well when one is chatting with an erudite fellow like Wallinger, who shepherded twenty-three volunteer-produced research reports through the City Club’s rigorous review process ranging from studies on property tax to marijuana legalization during his tenure.  He felt the one with the most impact was that on Portland’s Street Fees and Gas Tax.

Greg’s undergraduate degree at Susquehanna University was followed by work as a paralegal in a Virginia law firm where he worked on real estate, bonds and tax matters.   Two years followed as an AmeriCorps/Vista volunteer working on substance abuse issues for children in Helena, Montana, where he also met his wife, Stephanie.

After living in Reno for two years, they moved to Portland and he earned his Master’s at Portland State, followed by work for Stand for Children and then the City Club stint.   They have an eleven-moth old daughter. 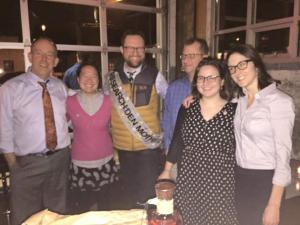 To momentarily digress and since the City Club studied the issue of marijuana legalization, it is also interesting to note that the old house – next door to the bar is one of the five Nectar group’s recreational cannabis locations:

“Nectar is one of the largest Marijuana dispensary chains in Oregon. We pride ourselves on a phenominal staff, great selection of quality products and a wonderful atmosphere.”

I still haven’t figured out why they have a person regardless of the weather, continually sitting on the front porch (she’s hidden by the column).  I guess she is a “bouncer” of sorts, and checks IDs…..

Now while the emphasis so far has been on the downstairs woodwork and the rear patio, any description of this reconditioned bungalow bar needs to mention the upstairs

Wallenger, showing he has athletic skills in addition to a keen intellect

Its a cozy attic-type space with a pool table with “pristine red felt” and “a record player where you can play your own records!!!”

Space for a cozy chat or to watch a game.

The art work, while it would not hang in a Park Avenue gallery, is cool and very much in keeping with the atmosphere intended.

And if one wants a cozy nook to either watch a sports event or just chat away from the crowd, there is a room right off the patio to accomplish that

There were good comments about the background music at the bar and since the Rambler reminded me of an old road house, in a fit of nostalgia I started thinking about all the tunes over the years with “Ramblin” or “Rambler” in the title or lyrics.

And don’t forget Dylan’s “Rambler Gambler” or my favorite – “Colder Weather,” by the Zac Brown Band, with these great lyrics:

He said I wanna see you again – But I’m stuck in colder weather –  Maybe tomorrow will be better,  Can I call you then?

She said you’re a ramblin’ man – You ain’t ever gonna change – You got a gypsy soul to blame  – And you were born for leavin’.

Zac Brown Band – they would like The Rambler too…..

Well, while retired and not on a road trip or stuck in a truck-stop diner in Lincoln thinking of a girl left behind in Colorado, Thebeerchaser is definitely a Rambler Man.

I loved this bar, applaud Christian for what he has created and urge you to pay the Rambler a visit to say “hello.”  I might see you there.