(Welcome back to Thebeerchaser.  If you are seeing this through an e-mail, please visit the blog to see all of the photos and read the story by clicking on the title above so the post is not clipped or shortened.)

Well Beerchaser followers, I’ve told you since March that I’ve not been to any new watering hole because of the lockdown and pandemic.

To be safe, we have just stayed away and confined our consumption of my favorite beverage to Happy Hours on our back deck with the exception of one visit to the Benedictine Brewery in Mount Angel, Oregon. (see below)

We added to that one exception on October 15th however, when we went to the Oregon Coast for a few days.  On a beautiful fall Friday, my spouse convinced me to break away from the Siren Call of “Breaking News” on cable television and drive down the Oregon Coast from our base in Lincoln City on the Central Oregon Coast. 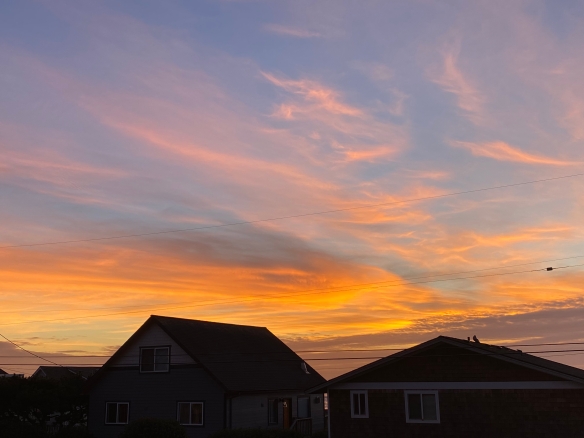 A beautiful sunset the night before helped me to fully grasp the natural treasure that we have in our own backyard.

And all the while, we remembered the legacy of Governor Tom McCall, whose actions in 1967 preserved public access to the beaches in the Oregon Beach Bill.

Yachats Brewing was not a new establishment for us – we had stopped here during a road trip in 2017 which I highlighted in a November blog post – it was a wonderful place to have lunch.  Still being cautious about COVID, we ate on the patio which is right on Highway 101.

We split a tasty pint named “Bestest Mensch” which is a hoppy and delicious collaboration with the innovative Wolf Tree Brewery a few miles up the road. Our server was friendly and helpful.

I had a delicious brisket sandwich while Janet’s chicken-salad sandwich was also a winner.  Yachats did a great job observing preventive and cautionary COVID measures so we were buoyed, so to speak, by the fact that this coastal brewery appeared to be thriving during these challenging times.

It was a wonderful day and we realized how fortunate we are to be able to have a day like this and will continue our prayers and support for those who are struggling with the pandemic.

Bars, breweries and restaurants are some of the hardest hit businesses during the pandemic and I was saddened to see that Bailey’s Tap Room and it’s upstairs annex, the Upper Lip – reviewed in the early days of Thebeerchaser – closed permanently.

I won’t go into all of the closures in Portland but to give you an idea of the breadth of this economic downtown for the hospitality industry, other shut-downs include Back Pedal Brewing  on NW Flanders, Grixen Brewery – a SE Portland brewery established in 2013 which was:

“….one of the area’s most striking brewpubs with open-beam high ceilings and old-growth timber repurposed into table tops and other accents.  Modern-industrial custom metalworks graced the space, with rolling bar-table frames and a 600-pound lighting trust above the length of the bar.” (Oregonian, 8/19/20)

We visited Grixen early this year as my neighbor was one of the three owners, but I didn’t have the chance to write a Beerchaser review.)

Another innovative brewery – Base Camp – which is owned by Justin Fay, a graduate of the Oregon State University Fermentation Science Program and opened in 2012 by some Klamath Falls friends, shut down its Buckman Neighborhood brewery:

“The taproom with its spacious outdoor areas, fire-pit and food-cart pod, was a popular spot for years, attracting neighborhood regulars and drawing from Portland’s beer tourism as the scene exploded around it, all while spreading the outdoor life mantra.” (Oregonian 8/19/20)

Even some of the stalwarts of the Oregon Craft Industry are having to revamp their operations to cut operating costs because of reduced patronage.  For example, Rogue Brewing shut its public house in the Pearl District in September after 20 years (Willamette Week) although its two other Portland locations will remain open.

With the closures above, I was heartened to see that another early destination when I started Beerchasing – The BeerMongers – celebrated its tenth anniversary last year.

I went to this eastside bottle shop and taproom with former Portland Mayor Sam Adams, in 2014 right after he assumed the Executive Director position of the City Club of Portland.cxcvx

The BeerMongers  is “known for its artfully curated selection of beers, being named the Best Beer Bar in Oregon by Craftbeer.com in 2018.”  (Oregonian 8/30/19)  The owner of Porto Bello, the pizzeria – a vegan trattoria in the same building as the bar in between BeerMongers and a tattoo parlor next door – came over to our table and said:

“Sam Adams, we really miss you.  I want to buy you guys a pizza!”

She came back ten minutes later with a delicious complimentary pizza which meshed perfectly with the pints we drank.

Unfortunately, it appears that Porto Bello wasn’t still around to celebrate with its neighbor in 2019.

Some of you know that I was involved as a volunteer in the planning of the Benedictine Brewery and St. Michael’s Taproom, which opened in the fall of 2018 on land owned by the Mount Angel Abbey and Seminary in the rural area east of Salem.

The community effort in erecting the structure in late 2017 is a wonderful story (check out the videos in the post below) and it’s one of only three breweries in the US owned and operated by Benedictine Monks.   https://thebeerchaser.com/2017/11/21/the-benedictine-brewery-beam-me-up/ 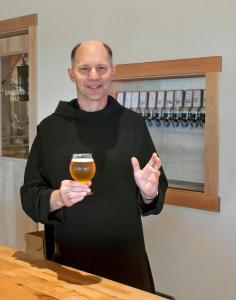 And former Beerchaser-of-the-Quarter, Fr. Martin Grassel, the Manager and Head Brewer reported that the first year of operations was a great success.  He brewed 118 barrels with sales that greatly exceed expectations that year.

When the pandemic hit in March and with the lockdown, only take-out sales were allowed for ten weeks in 2020, but since reopening,  the Brewery continues to thrive with August being the highest month of sales since opening in 2018.

My wife and I can confirm that the Taproom was very cognizant of COVID measures and has an expansive patio area which allows social distancing.   The Taproom will soon have a permanent heated pavilion tent above it during winter months. 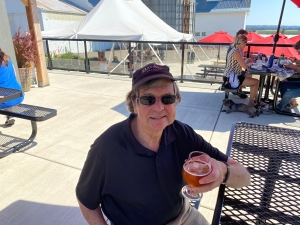 And the best part of was taking the short hike up to the Abbey Hilltop and strolling around the  campus with outstanding views.  The beautiful chapel has also reopened.

While the ambiance and the scenery is a real draw, the key is Fr. Martin’s growing skill as a brewer.

With over ten beers now on tap, this former software engineer has drawn rave reviews for the quality and taste of his brews with the St. Michael’s Helles being the most popular although the flagship Black Habit is also a favorite. 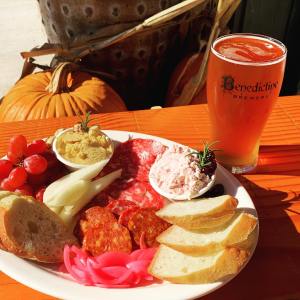 And take a look at the charcuterie plate that you can enjoy while drinking one of Fr. Martin’s beers.

Survival of the Fittest?

Speaking of the pandemic, there’s nothing remotely funny about this global tragedy, but maybe it helps a little to try to look on the light side when one can – for example, this post from one of my favorite dive bars.

Darwin’s Theory is in downtown Anchorage and owned by a fellow Oregon State University alumnus.  This “story” was in it’s latest newsletter.

Darwin wrote: “We were in the 11th day of self quarantine.  As I saw my wife quietly standing in front of the living room window staring off into space with tears running down her face, it was breaking my heart.  I was trying to think of some way to cheer her up.  In fact, I almost considered letting her inside, but rules are rules!”

Maybe he named his bar Darwin’s Theory because of his adherence to the concept “Survival of the Fittest”.…

In a previous Beerchaser post where I cover the legal profession and how I enjoyed working with lawyers for over thirty-five years, I mentioned some bizarre cases.  Some of the most recently appreciated essential workers have been emergency responders although this 2001 incident reported by MyPlainview.com addresses an incident some years ago.

The incident precipitating the lawsuit was bizarre:

“An ambulance driver was fired after being accused of stopping for doughnuts while taking a patient to the hospital….The incident occurred while (he) was taking a boy to the hospital with a leg injury.  The injury was not life threatening.  The boy’s mother filed a complaint.” 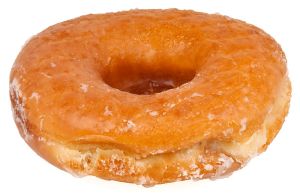 “Eat one whenever you want”…Not!”

But perhaps more bizarre was the fact that the driver then filed suit against the City of Houston for intentional infliction of emotional distress and racial discrimination.

While initially a judge rejected the City’s effort to have the case dismissed and ordered the plaintiff to amend his lawsuit, all of the claims were ultimately dismissed in July 2002. (I’ve been saving that one up for a long time….)