While Thebeerchaser typically does not review bars that are directly connected with a restaurant, which means most of the McMenamen brothers’ lairs, there have been a few exceptions.   The White Eagle Saloon (see link to post in November, 2012) was of such historical significance that it made an interesting post.   The Buffalo Gap Saloon (see post in December, 2012 ) although not a McMenamin’s establishment, also has a very captivating story.

Brian Doyle at the Fulton Pub

Brian is also the editor of the award-winning UP Magazine, Portland, and since both were on campus, the St. John’s is nearby, has a good line-up of beers and a rich history to check out.

I admire and respect what the McMenamins have done for the Oregon economy, historic preservation and beer in general since 1983, but going to their restaurants can often be kind of like going to the dentist – a nice receptionist or hostess gives a friendly greeting followed by what too often is a long wait and then either mouthwash or beer depending on which of the aforementioned venues you visited on that trip – you know the drill…..so to speak.

The entrance to the theater

Most of their establishments get average ratings on sites such as Trip Advisor and Yelp and the following from a Yelp review of the St. John’s back in 2008, albeit dated, still sums it up well:

“Like all good Portlanders, I have a snarky and somewhat ruthless attitude about McMenamins. But it serves its purpose at times…..It’s a natural for your visiting relatives.  The food is overpriced, predictable, but tasty enough.  Booze is available.  The patio at this location is actually quite pleasant.”

Although one guy named, Aaron, a California resident and whose choice of fine eateries thoughout the globe is somewhat questionable, raved on Yelp in February, 2014, “Literally one of my 5 favorite restaurants in the world.”   Really Aaron!!?  Have you ever been to San Francisco??

That said, both the tater tots and their beer generally get very good marks and we were at St. John’s that day just to drink and converse rather than eat.

And I have learned that any bar or tavern experience can be enhanced by your companions, which was the case that day.  So before I talk some more about St. John’s, let’s find out a little more about Brian and Sam.   They are both very smart and gifted individuals and we have a lot in common – they both have written books and I have read books.

And while the above volume sounds a little dry, Sam and his consulting firm (Crafting a Strategy) have just published a new book which is a must read for any potential or actual entrepreneur in the restaurant trade , an Ebook on “How to Make Money with Food.”  It is available for only $4.99.  (see the following link)

While I typically read escapist trash novels, Brian Doyle’s books have become a staple although they are more cerebral than most – quotes from English philosopher and poet, William Blake, detailed character development and meticulous descriptions of the Northwest environment that Brian loves.

As one Good Reads reviewer asked rhetorically about Brian’s most recent novel (Martin Marten), “Did Bryan Doyle’s high school yearbook say, ‘The guy least likely to be attacked by a bear due to his extraordinary capacity for observation?'” 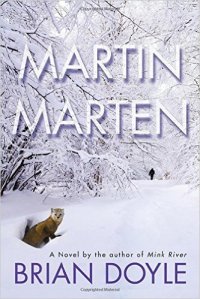 As a brief example – the following from page 15 in which he describes the range of items that could be purchased in a general store in Zig Zag, Oregon – the setting for Martin Marten:

An Amazon review characterized this novel as “a braided coming-of-age tale like no other, told in Brian Doyle’s joyous, rollicking style. Two energetic, sinewy, muddled, brilliant, creative animals, one human and one mustelid…come sprint with them through the deep, wet, green glory of Oregon’s soaring mountain wilderness.”

A “joyous, rollicking style” and a taste for good wine…..

Note:   I had to look up “mustelid” and it is defined as “a mammal of the weasel family (Mustelidae), distinguished by having a long body, short legs, and musky scent glands under the tail.”)

But we digress, now back to the St. John’s, but not before an appropriate William Blake quote on beer from his poem, the “Little Vagabond”:

I got there early and was downing an outstanding Ruby Red, (“an ale light, crisp and refreshingly fruity…..processed raspberry puree is used to craft every colorful batch.”)when they arrived from the UP campus.  Both Brian and Sam, to my surprise, ordered wine.  Brian, possibly after the intense research for his book The Grail  (“A year ambling & shambling through an Oregon vineyard in pursuit of the best pinot noir wine in the whole wild world”) – admits that besides McMenamin’s Hammerhead, wine has become his drink of choice. 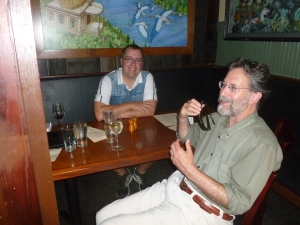 With Sam, it was a temporary gluten issue and perhaps he was anticipating his trip in the next two weeks to visit breweries in Germany.  I reminded them both  of an anonymous but pithy quote:

“Beer – because one doesn’t solve the world’s problems over white white wine…..”

As an aside, I was the winner that afternoon, because my second beer was also a great seasonal brew – Copper Moon:

“The upfront hop bitterness…..is relatively low, complementing the malts nicely without being overpowering. The hop flavor and aroma are another matter, as the Citra and Chinook hops used in the latter stages of each batch intermingle delightfully to generate a dazzling citrusy, flowery and slightly spicy olfactory experience. All these things blend into a refreshing, flavorful and organic Summer Pale Ale.”

The St. John’s pub is a spacious and comfortable setting with a great outdoor patio and a cozy second-floor balcony.  The dark wood interior has interesting knick knacks and art work – typical of most McMenamin watering holes.

The history of this building is also remarkable.  You should check out their website to get the entire story, but here are a few highlights:

“Built in 1905 as the National Cash Register Company’s exhibit hall for Portland’s Lewis and Clark Exposition, this spectacular building was barged down the Willamette River after the expo to its current location, where subsequent incarnations included a Lutheran church, an American Legion post, a bingo parlor and a home for Gypsy wakes. The ever-evolving domed structure was later reinvented as Duffy’s Irish Pub and finally, St. Johns Theater & Pub.” 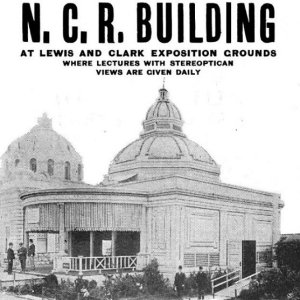 One can read about church scandal with the First Congregational Church (the preacher was accused of being a “traitor and a wife stealer”) and then the chronology involving a Lutheran Church (1931) before becoming an American Legion Post (with a bingo scandal), in addition to the stories involved with “saloons, billiards halls and traveling evangelists.”

I have often experienced poor service (possibly more accurately described as “slow” because of inadequate staffing) at McMenamins, and maybe it was because we were there at non-peak hour, but our server, Jessica, was friendly, knowledgeable and efficient.

Mural in the St. John’s Pub

The St. John’s Pub is a very comfortable establishment for a few beers, some reasonable comfort food if you are not in a hurry and some fascinating history for those who have an interest.