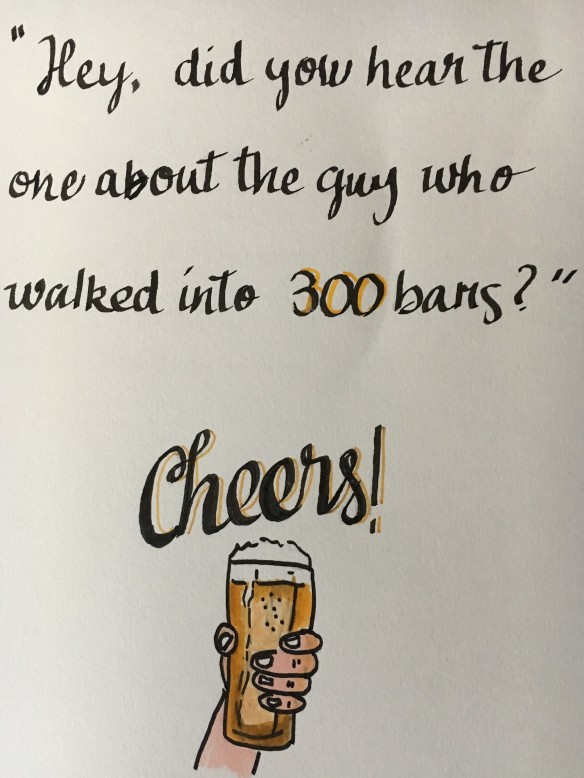 (Cheers to my wonderful sister-in-law, Pam Williams, for doing the calligraphy and graphic above.)

Those who follow this blog, know that it started as a hobby after I retired in 2011 as the COO of Schwabe Williamson & Wyatt – a large Portland law firm where I had worked over twenty-five years.  The whim to visit and write about bars and breweries came after a lunchtime drop-in to Lumpy’s Landing in Dundee on the way to the Oregon coast. 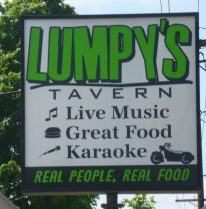 While the plan was initially to confine my exploits to just Portland area establishments, our retirement travel combined with my wife, Janet’s, discovery that she liked IPA’s rather than confining her beverage selection to strictly Oregon Pinots, offered the opportunity to expand this “journey” to Europe, Alaska, Hawaii, many regions of the US and throughout Oregon – from the coast to the Cascades to Eastern Oregon.

So at the end of 2018, my count of reviews – all of them except when traveling, consisting of at least two visits, was at 287.  Of these 111 were in the Portland metro area with the remaining 176 watering holes, scattered throughout the aforementioned localities.  The post below – published in January provides a complete list by year of those venues:

A week-long trip to Phoenix in March this year for Spring Training, hikes and Beerchasing upped that count by eight and reviews of four Oregon establishments, The Gemini in Lake Oswego, Old Town Brewing and the Bantam Tavern in Portland and Beachcrest Brewing on the Central Oregon Coast, raised the tally to 299.

The “living wall” at the unique Pigtails Bar in Scottsdale.

The threshold of this significant milestone, begged the question of the appropriate bar or brewery to “honor” as # 300 as well as which Beerchaser regular to ask to join me for that momentous occasion. 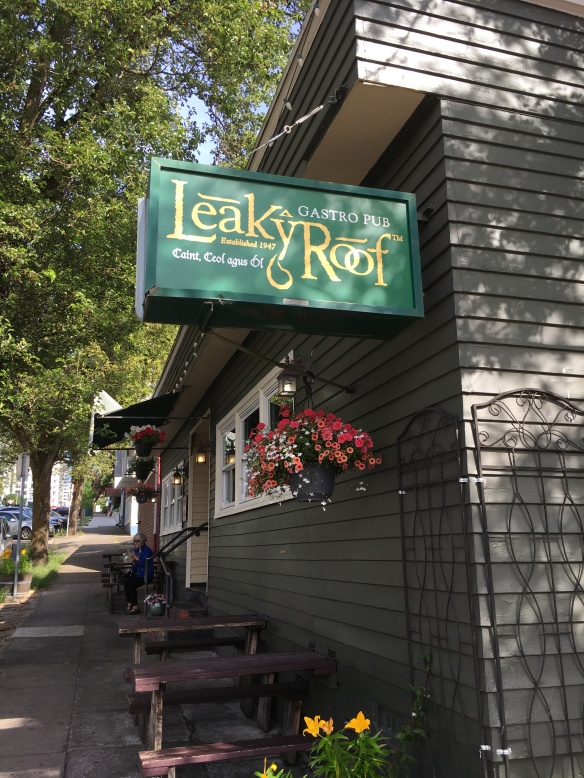 The Leaky Roof  (hereafter “The Roof”) – a wonderful and long-time SW Portland neighborhood bar or gastro pub – founded in 1947 – originally as a food cart and one that survived a devastating fire, seemed fitting.  It had been a convenient (two blocks away) and cherished gathering place for many after-work brewskis with my colleagues when I worked at the Oregon State Bar from 1979 through 1985.

I returned there after an absence of 33 years in June 2018, with Janet and some good friends and Beerchaser regulars (David and Kate Dickson and Roy Lambert and his spouse Mary Maxwell).  We had a great meal and sampled their good tap list and I vowed to return for my second review and subsequent blog post.

That occurred on May 6th and it was absolutely appropriate that my long-time friend, Dennis B. Fergson accompanied me.   I first met Fergy in 1979, when I started at the Bar Association and the firm for which he was President and Chairman of the Board – JBL & K Insurance, served as the Bar’s benefits consultants.

After “retiring” from insurance and since he knows everyone in Portland, he has worked at Portland State University – first as Assistant Athletic Director and currently as Senior Philanthropic Advisor.  (That means he knows who to approach in the Rose City to donate to the City’s excellent university – of which both my wife and I are alums in the graduate Masters in Public Administration program.)

I will return to Denny later in the post, but we had a great lunch – Fergy had one of the many – perhaps hundreds – of cheeseburgers he has consumed during lunches over our forty-year friendship. I had a great Reuben sandwich, which rivaled what former Mayor Bud Clark’s Goose Hollow Inn down the street claims as the “Best Reuben on the Planet.”

I was surprised that The Roof has not been named as one of Portland’s go-to bars in Willamette Week’s Annual Bar Guide – an excellent and comprehensive resource for Thebeerchaser since starting this hobby in 2011.

Other than a brief reference in one article on pub crawls  and a short review by legendary former WW Arts and Culture Editor, Mathew Korfhage in 2013, the only other hit from a Goggle search with WW and the name of the bar in the search terms is a 2017 WW article entitled:

“Portland Woman Sues State Senator Rod Monroe for $3 Million After a Leaky Roof in His East Portland Apartment Building Allegedly Left Her Disabled”.  (emphasis supplied)  It is unknown whether beer or any other alcohol was involved in this incident…..

The website promises ‘the largest selection of Irish whiskey available in Portland,’and while we can’t verify the claim, the list doesn’t disappoint, with 24 marks and vintages of uisce beatha (the name for whiskey in Irish) in its tiny hearth-and-hardwood space. Dirt-cheap, triple-shot whiskey flights are available….”

I did not sample The Roof’s whiskey inventory – Irish, Scotch, Bourbon and Blended – extensive as you can see from their menu – and only had a few of the nine beers on tap – which I was glad to see included both Guiness and PBR.

The picture below shows that they have a classic bar set-up which attractively houses the various hard liquors for which the bar has developed a reputation.  They also offer a nice selection of wines.

Another surprise in doing additional research on the bar, is the breadth and excellent quality of their menu – deserving of their claim to be a gastro pub.  It ranges from a robust weekend brunch menu, a good selection of lunch options, to standard starters, sandwiches, salads and seven very reasonably priced dinner entree’s ranging from fried chicken to Shepherds Pie (Korfhage raved about this) to Pecan Crusted Trout to Stuffed Meatloaf – which could be topped off by Crème Brule’e or fried ice cream for dessert.

Sabrina, our personable and competent server with Denny

And I am sorely tempted to return for their Happy Hour – during certain hours every day of the week in which you could get a bowl of Guinness Irish Stew for a mere $4 plus a buck off your alcohol preference.

I have to admit that as I stated in one previous bar review, having lunch (or breakfast at The Dockside) with Fergy is like winning the lottery, but notwithstanding the character and personality of this remarkable gentleman, it did not influence my positive reaction when reconnecting with The Roof.

Dennis Ferguson, who was one of the Few and The Proud, during his service with the US Marine Corps, is also an outstanding athlete and family man.

We still laugh about the time in the early 1990’s when I walked into a lunch at Huber’s during some stressful law firm merger negotiations.  After a few minutes of conversation, he said to me “Williams, you need to shape up.  Quit slouching and get rid of the monotone and be a leader.” 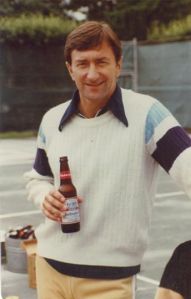 A few cheeseburgers back……

He has always been motivated, but I think his tendency to be a mentor was born when he was allegedly on a business trip to Keokuk, Iowa in 1985.  He left a message with the hotel front desk to give him a call at 6:30 and when he answered the next morning, the clerk said, “Mr. Ferguson, this is your wake-up call.  What are you going to do with the rest of  your life??”

When I told my wife that I was going to lunch at The Roof with Denny, she said, “Don, you better change.  Denny always looks so classy!”   To top that off, as we walked in, a well-known Portland investment adviser who knows both of us and walked in right before us and came over to our table, looked at Fergy and said, “You never age, do you?” 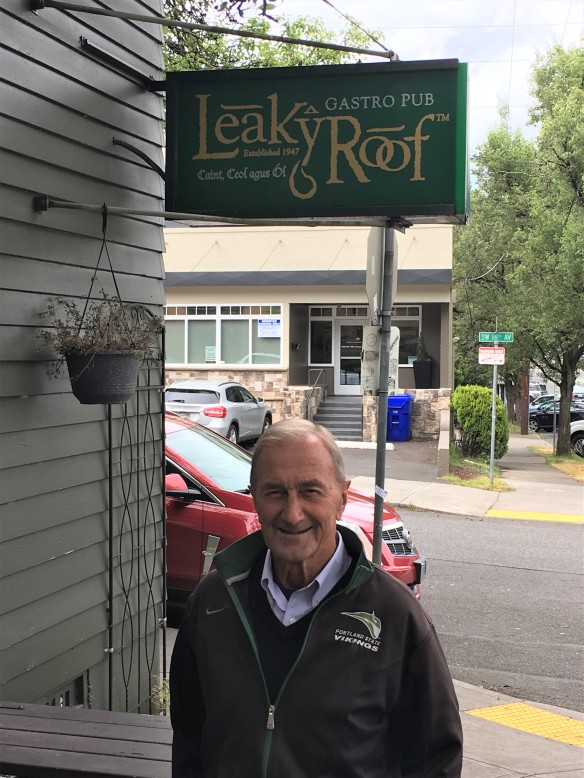 So to say the least, being around Dennis B. Ferguson ups one’s game, but regardless of whether you have the pleasure of his company in the future as I will, you should give the Leaky Roof a visit – and not just for a drink, but for lunch or dinner.

Perhaps it doesn’t get the publicity or accolades of The Goose because of the well-deserved fondness Portlanders have for Bud Clark, but it scores as one of the premium neighborhood gastro pubs in Portland.

2 thoughts on “Okay Beerchasers – This is No Bar Joke!!”