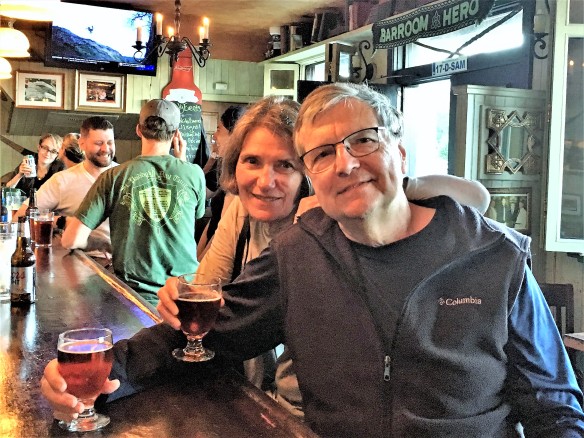 The Beerchaser and wife, Janet at historic dive bar, Durty Nelly’s in Boston

Another year of Beerchasing concludes and after over seven years, the count of bars, pubs and breweries visited and reviewed logs in at 286 – with 111 of those in the City of Portland or metro area and the remaining 175 ranging from several in Europe to establishments in Alaska, Hawaii, various regions of the US and all across and down the coast of our wonderful state of Oregon.

Indeed, our retirement travel has expanded the scope of this retirement hobby, which I originally intended to be confined to those in Portland.  The chart below was done after an intensive audit of all my posts during the last 7+ years – because when it comes to watering holes – accuracy is important…..

As has been the case each year, the number of views and visitors to Thebeerchaser.com has increased.   And I beg your indulgence in spouting a few of these statistics – possibly because the habit was ingrained by reviewing the “always stimulating” management and productivity reports produced at a large law firm – Schwabe Williamson & Wyatt – one I was proud to call my work home for twenty-five years.

And I still am surprised at where these visitors view the posts with 86% from the US and another 6% generated collectively from India, Canada, the United Kingdom and Germany.   The remaining 8% were people from 128 different countries, many of whom I suspect, Googled the term “Beerchaser” and were probably looking for something different than my bar tour.

The national flag of Lesotho

As usual, this hobby has been educational for me and 2018 was no exception.  For example, it took some research to locate where the one view I got from Lesotho emanated – It’s an enclaved country of two million within the border of South Africa.

Note:  Now it does not surprise me, but after publishing this post I got a comment from Jay Waldron, Schwabe partner and Beerchaser-of-the-Quarter (March 29, 2016) that he had ridden his motorcycle through Lesotho when he cycled through South Africa.  Click on the link above to read about more of his exploits.

As you might have noticed from the chart at the beginning of the post, the number of Portland bars at twelve, was one of the lowest counts since this blog was launched in 2011.  This was because we traveled more and I had extensive involvement as a volunteer in the development of the Benedictine Brewery at the Mount Angel Abbey.

I’m proud to say that we opened the Brewery and the St. Michael Taproom in September and so far, it has been a great success.  It’s one of three breweries owned and operated by monks in the US and came to fruition after six years of planning, fundraising and construction.  You should plan to visit the Taproom in 2019. 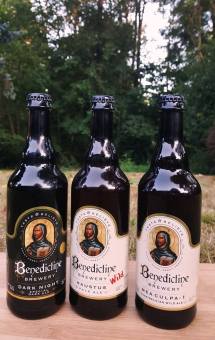 While the number visited and reviewed was somewhat meager at only twelve, I Beerchased at some distinctive bars and pubs this year ranging from the classic NE Portland dive bar – The Standard to the upscale cocktail bar – Palomar –  named Bar-of-the-Year by Oregon Live to a new and wonderful neighborhood pub not to far from my home in West Linn – The Salty Rhino.

And there was the cruise on the Portland Brew Barge with my former Schwabe colleagues in  August.

We also paid our first visit to what has become our new favorite place to eat and have a brewski or cocktail – Wilder Bar/Cafe in Northeast Portland. I included the Benedictine Brewery in Mt. Angel in the Portland area as everybody in the Rose City should make this short trip.

Wilder – A gem in NE

Of course, there were a couple misses – venues to which I would not return.   These included the Happy Fortune and Bar 33 – Brooklyn.  Read the reviews to determine why Thebeerchaser – who by his own admission – loves almost all saloons and pubs, thought these were not worth your time. 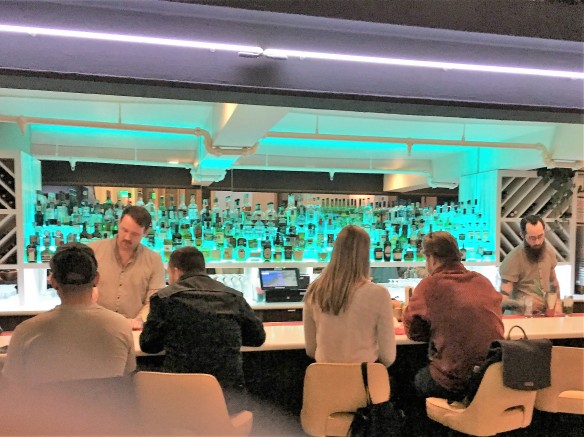 Stop in for a daiquiri at Palomar on SE Division

*  After seven years, The Woodsman Tavern has now closed and a new site for popular restaurant Tasty N Sons will open in the same quarters.

Bars Outside of Portland

We traveled to Arizona for a week in the spring and while Phoenix/Scottsdale is definitely not our favorite urban spot in the US, there were some great breweries and hikes to make it a good trip.

The highlight of our travel in 2018, however, was an eleven day trip to New York City, Maine and Boston.  While we love the Northwest, the frenetic and diverse culture of Manhattan;  the scenery, including Acadia National Park; the micro-breweries in Maine (ranking third in breweries per capita in the US) and a night in the North End of Boston, made it a vacation to remember.

Overall, we visited thirty bars, pubs and breweries on these two trips.

Atlantic Brewery in the heart of Bar Harbor, Maine

How can I rationalize the fact that in 2018, I named only two Beerchasers-of-the-Quarter (BOQ) – a contradiction to the name of the “honor.”  Again, maybe it was the travel or prhaps it was involvement in the Benedictine Brewery……..however…… 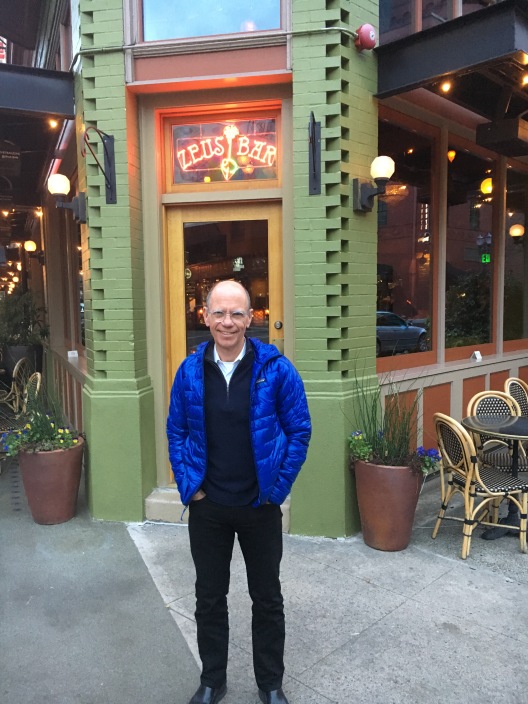 Mark Edlen outside his favorite bar in Portland

I prefer to assert that the gravitas of the two 2018 BOQs is expansive enough to justify naming only two.   Portland developer, environmentalist, outdoorsman and civic icon, Mark Edlen, was named in February and it was a pleasure re-engaging with Mark, who I originally met in 1979.

Our law firm was also the beneficiary of his real estate expertise when he served as our commercial realtor for a number of years at Schwabe before he formed Gerding Edlen Development Co. in 1996. 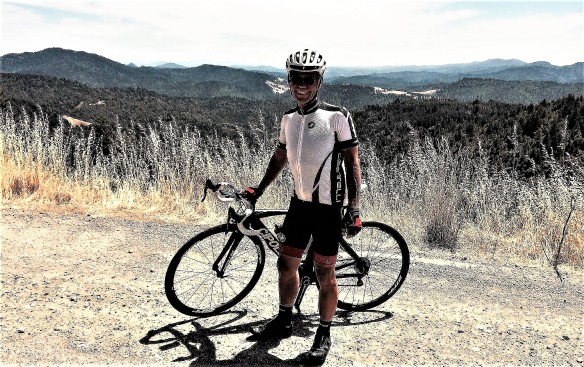 And I could also maintain with some accuracy, that the second BOQ – the 1967 Oregon State Giant Killer Football Team and it’s de-facto historian, Jud Blakely, if considered as individuals rather than as a group, would garner this designation for a number of years.

Jud, who is an SAE fraternity brother and has been a friend for over fifty years, was one of the early BOQs (September, 2013) based on his remarkable persona and achievements.

Any OSU alum, or for that matter, any Oregonian interested in one of the great historic athletic tales of the State of Oregon, should visit the website below for the complete story.  It’s a labor of love by this OSU alum and former OSU Student Body President and I consider it the War and Peace equivalent to sports websites.

Blakely receiving his Bronze Star and promotion to captain from the Asst. Comandant of the Marine Corps.

Indeed, the story of the Giant Killers is so compelling, that it will require subsequent Beerchaser posts to complete the story of this unique team and the outstanding individuals.

And it was incredibly rewarding to interview or reconnect with some of my long-term friends who were either on the team or associated with the Giant Killer Era including Larry Rich, Craig Hanneman, Chris Wahle, Gary and Duane Barton and Scott Spiegelberg (played football after the Giant Killers and is now Director of OSU Varsity and Alumni Engagement) – but also to meet a number who I didn’t know until researching for the blog post.

Fear not for I have already identified my next two Beerchasers-of-the-Quarter and will get back on track with some very interesting people in 2019.

Similarly, since I have already visited, but not made a customary second visit and/or written the reviews of another ten Portland area bars and two from a trip to Palm Springs, Thebeerchaser will have no shortage of watering hole stories to relate.   If you have a bar, pub or brewery that deserves inclusion, please let me know.

Stay tuned in 2019 for the fascinating story of Portland’s Old Town Brewing…..

And in January, I will also publish the complete (and audited) list of each establishment visited from 2011 to 2018 including the location and the date of TheBeerchaser post for those who want this data base as a resource.

I might even decide to identify a number of my favorite habitats of different types e.g. dive bar, neighborhood, sports, cocktail lounge, etc. during this journey as well as pointing out the few that I would recommend you pass by as they would not enhance your Beerchasing experience in my humble opinion.

At the covered bridge entrance to Pondicherry Park and the Pinehaven Trail in Bridgton, Maine

Now Edgar Allan Poe was not considered a really positive person based on his personal life including his military career including being purposely court-martialed at West Point, his marriage and his caustic literary reviews and writing on many macabre topics.

That said, it seems appropriate to start the New Year out with one of his poems on the merit of drinking ale.  (https://www.goodreads.com/quotes)

Fill with mingled cream and amber,
I will drain that glass again.
Such hilarious visions clamber
Through the chamber of my brain —
Quaintest thoughts — queerest fancies
Come to life and fade away;
What care I how time advances?
I am drinking ale today. 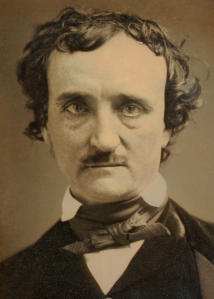 At least he was positive about ale!