In a recent post on Thebeerchaser, entitled “Beerchasers-of-the-Quarter (Who?  What? Why?)”,  I listed the thirty-five individuals I’ve named in the almost ten years since this blog started.  These “honorees” may or may not have anything to do with bars, breweries or beer, but have interesting stories and have made their marks in both their personal and professional lives.

And their stories continue so I decided to give you an update on what five (or maybe six) of them have done recently – even during the pandemic to continue their legacies.  To see their stories in the original posts, click on the link that highlights their names.

Besides his blog, this Oregon Sports Hall of Fame journalist (also five-time Oregon Sportswriter of the Year) and broadcaster, works for NBC Sports NW.

Since the start of the NBA Season, he and Chad Doing, co-anchor of Rip City Drive on Portland’s Rip City Radio, do a one-half hour segment before every Portland Trailblazer game.

This “Blazer Warmup” is entertaining and informative.   They play well off each other and Dwight’s knowledge, both of the history of the Portland team and his analytical insight make this a show worth watching.

Chad is a delightful radio personality and unlike some talk-show hosts, he doesn’t take himself too seriously although he’s very knowledgeable and provides good commentary.

This Portland attorney and former colleague at Schwabe Williamson & Wyatt has an active Energy and Environmental Law practice.  Since being named a BOQ in 2016, Jay has continued moving and shaking.

In 2017, he was admitted to the US Rugby Hall of Fame.  He is now Chair of the US Rugby Foundation’s fundraising and has served as a Director.  A 2017 article in the Providence College News (his undergrad alma mater) stated:

“(His contributions span) nearly five decades as a player, coach, TV broadcaster, and ambassador of the sport. He began his rugby career in 1968 as a University of Virginia graduate student, where he received his master’s degree, worked on his Ph.D., and then received his juris doctorate while serving as a player, president, and captain. Waldron played on numerous rugby representative teams and won the university boxing championship.”

(The story of the UV Boxing Championship is worth a glance alone and explains how he acquired the moniker “The Dancing Bear.”)

As you will see if you check the original blog post, Jay’s yearning for adventure (possibly caused by some of the blows to the head on the rugby field or sparring with pro-boxer Ray Lampkin) have led him to extreme adventures.

Death Wish? (This is Waldron)

Among these are river rafting including a 1996 China trip down the Upper Yangtze, in addition to motorcycle racing and well over twenty road trips on his motorcycle throughout the US, New Zealand, South Africa and South America.

Jay still practices law and continues riding his motorcycle – he favors BMW’s or Ducati’s (“Harleys are too slow, too clumsy, too noisy.”) which was the cause of a recent concussion and broken clavicle – but that’s another story.

And speaking of Dwight Jaynes, you can read The Godfather’s recent column about both Jay and his son, Shane, at the link below.

Shane was just announced as the new Offensive Coordinator of the Seattle Seahawks. He evidently inherited some of his parents’ work ethic and athleticism.

Karen and Jay have been married for fifty-two  years (they met at a bar when Jay was a bouncer – but that’s another story…) and both have won decathlons for their age group at the Multnomah Athletic Club.

Karen and Jay Waldron (Did not wear a bow tie when he was a bouncer….)

Shane was most recently the passing game coordinator and quarterbacks coach for the Los Angles Rams.

This followed assistant coaching gigs at Notre Dame, the New England Patriots, the University of Massachusetts and the 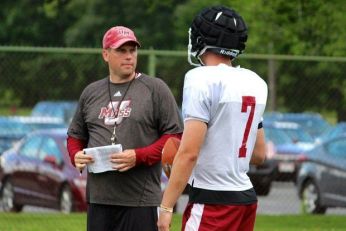 Washington Football Team (formerly Redskins).  He played football at Tufts University where he was a tight-end and long snapper.

Amy had a very successful career as the co-host of the award-winning Mike and Amy Show on KWJJ – the Wolf, which ended in 2018 after almost twenty years.

Not a long-term career option

Upon graduation from Scripps College, she realized (rather quickly) that she was not going to make a living as a professional mandolin player and singer in a New York City group called The Bushmills.

Amy’s journey continues to be fascinating, having attended a eight-day Clear Lake, Iowa school in 2018 at the World Wide College of Auctioneering where she was certified to be a benefit auctioneer.   In addition to her other work, she now emcees/auctioneers fundraising events.

Then her background in writing and broadcasting led to her two current roles – copywriting for national brands and, most recently, as contributing host and producer of On Deck with Young Musicians for Portland’s All Classical Radio (89.9 FM) each Saturday at 5:00 PM.

A Portland native, Amy has lived in New York, LA, Dublin, Paris, and DC, but I’m glad that this truly captivating individual continues to call the Rose City, her home.

In a recent (February 1) article in the Portland Oregonian on the late actor Bing Russell, Jack, who was a very good friend and played a key role in the wonderful story of The Battered Bastards of Baseball, was quoted on his friend and client:

“’The world was his stage,’ says the retired lawyer and former Portland TV personality. ‘He was the most unforgettable character I ever met. Bigger than life.’”

Jack Faust in 2012 Beerchasing at the Buffalo Gap

The article mentions Jack’s recollection of the arbitration in which he was the lawyer in the litigation against Major League Baseball and stated of his star witness:

“’He (Bing) was Jimmy Stewart playing Mr. Smith Goes to Washington,’ Faust, his lawyer, wrote years later in a remembrance of his friend. ‘This was not about money, Bing said, it was about the soul of a city.  The testimony ended with Major League Baseball’s lawyer answering ‘God, no,’ when he was asked, ‘Any more questions?’” 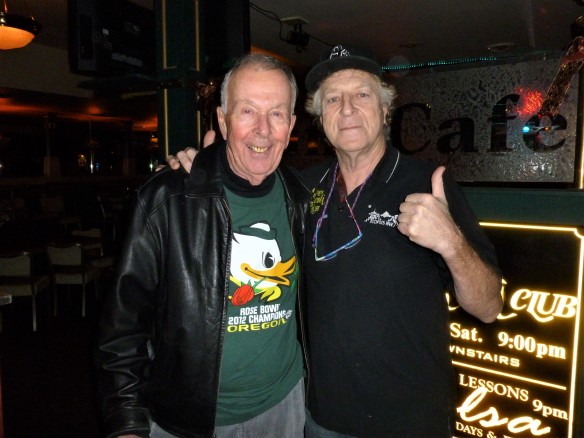 Jack Faust at a 2014 Beerchasing event in Frank Peters’ Grand Cafe.  Frank “The Flake” was the legendary Manager of the Battered Bastards. (Faust’s Oregon State jersey was at the cleaners.)

Russel was offered $20,000 to settle, but refused and “Bing won — he was awarded a staggering $206,000, an amount he had suggested.”  And to read more about the incredible story of another character – Frank Peters – in that saga read: https://thebeerchaser.com/2013/01/23/a-frank-conversation-about-the-grand-cafe/

And for those wondering, Jack and Amy Faust are the only father-daughter Beerchasers-of-the-Quarter and are well deserving of the “honor.”

Those who follow this blog know that my favorite watering hole of the almost 400 visited in ten years of Beerchasing is the Dirty Shame Saloon in Yaak, the Montana village, where I  stayed for two nights on a 2019 Montana road trip.

That’s where I met one of the most charismatic Beerchasers-of-the-Quarter, John Runkle – besides owning the Saloon he owns the Yaak River Lodge – a mile down Yaak River Road. 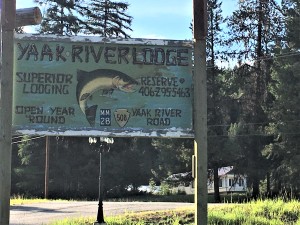 Notwithstanding our divergent political views, John and I had great conversations while I was there getting information for the blog and we have stayed in touch electronically since that time.

Thebeerchaser and John in 2019 – notice whose on the right…..

You should read John’s story in my August 2019 post and his interesting background growing up in Orange County, CA, his military service as a paratrooper, his success in real estate and how he ended up in Yaak in 2004 after first purchasing the Lodge and then The Shame in 2013 – out of foreclosure.

Since I fell in love with Montana on this six-day solo road trip before I picked up my wife who flew into Billings for the remainder of our fifteen-day journey, I’ve subsequently read a number of books about Montana history – particularly on its early mining industry, the outlaws, vigilantes and the efforts of early law enforcement to enforce justice in the raucous frontier environment.

And I can just picture John as a larger-than-life sheriff in one of those historic towns such as Virginia City, Lewiston or Fort Benton.

And being a sheriff, might have come in handy when he encountered a crazy guy with an A/R 15 who John bear-sprayed after he tried to get back in the bar after Runkle kicked him out.  (See this story in the Daily Missoulian entitled:   “Troy Man Charged Following Saturday Night Incident at Yaak’s Dirty Shame Saloon.)

The Dirty Shame is not only a great and historic dive bar, but a cultural phenomenon and John, through his dynamic style of communication, entrepreneurial spirit, story telling and splendid sense of humor, maintains the spark even on cold Big Sky nights.

Part of John’s story is how he met his wife, Dallas, about five years ago when she applied for a job at the bar while on break from getting her Masters degree in Applied Behavior Analysis at Arizona State University.  She is now a teacher and tutor.

Their adorable older daughter was two and one-half years old when I was there and Dallas was nine months pregnant with their second daughter. 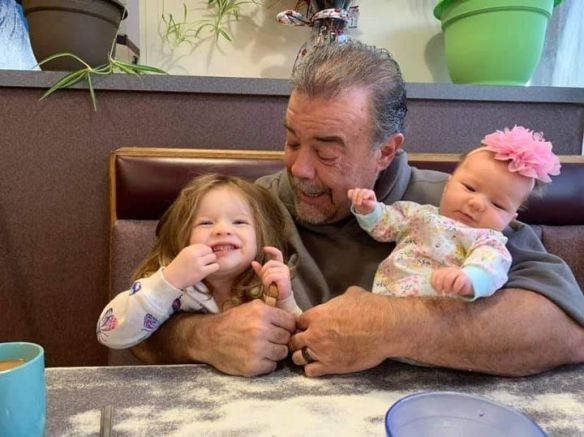 The Proud Papa with “The cutest little girls in the World.”

“So my wife is pregnant again.  Can someone explain to me how a 60 year old man
keeps getting his wife pregnant?”

Well, the 131 comments responding to his rhetorical question are entertaining as you might imagine.  So what’s ahead for this guy?   Well, if you check out the info in the link from Yaak River Realty, you will see the opportunity to purchase the Dirty Shame for $349,900.

In a telephone conversation with John today, he said that the Lodge is also for sale. “When I was younger, I didn’t mind the snow and cold weather. Now I do.”

The family will be moving to Yakima for about a year where Dallas is teaching and then ultimately to Texas where most of their families live. I asked if he was going to own a bar in Texas and he said, “If I do, it will not be a seasonal one like the Shame.”

We ended the conversation with him asking me if I was going to be in Yaak on Saturday night.  “Don, it’s the first time male strippers will be appearing at the Dirty Shame.”

I told him that I’d wait for the Adult Easter Egg Hunt in April when it’s warmer. Go Figure…

I’ve known most of the BOQ’s personally, but never had the opportunity to meet this titan of the latex industry.  Notwithstanding the fact that Vandelay Industries flourished supplying PPE during the pandemic, Art became depressed and out of sorts.

During the lockdowns, he was consumed with watching old Seinfeld reruns, binge rubber bridge matches and recording the whale migration along the California coast.  However, after recollecting old memories such as his two-year tenure as president of his eighth-grade class and the thrill of being voted “Most Likely” his senior year in high school, he got inspired.

Thus, his malaise ended and with the election of Joe Biden, he took action notwithstanding his one-time admonition at a corporate retreat, “Annoy a liberal – Work – Succeed – Be Happy!!”

Art started lobbying for the Secretary of Labor position until a White House official phoned him and stated, “The closest you are going to get to a Cabinet position is to enroll in a woodworking class at Community College.”

So while Art is temporarily stymied, stay tuned for continuing exploits and the future “Work of Art.”  *

* Thanks to Carson Bowler – a Vandelay understudy and mentee and his assistant, Doreen Winterbottom for their cooperation.